The 2016-2017 school year at Clinton began rough. While Anna continued on her somewhat typically-successful path with Jr. High Band and Choir, Selah ran into major difficulties. Her behavior had become sporadic, even somewhat destructive. She rapidly became an issue for her teachers – with frequent notes home because she wasn’t doing her homework, keeping up with classwork, and progressively becoming a general “issue” in classes. Indeed, she was becoming far more trouble than any 5th grader ought to be.

Diana and I had come to our whit’s end. This wasn’t the first time we had dealt with serious behavior issues in Selah. The previous year which began as another year of homeschooling turned into a nightmare with her sneaking and hiding away food in her room, damaging her bedroom walls and furniture, and going out of her way to sabotage her homeschool work. After much prayer and even attempts to get her some counseling, we enrolled her then in Clinton schools where she did somewhat better for that school year. But the Fall semester of 2016 saw a return to significant troubles and after conferences with her teachers and school counselor, we were out of answers.  All we could figure out was that Selah needed “something” in her life for her to focus and giver her something to work for.

Then on day in early December, a customer came into the bank where Diana was working as a teller. The customer visited with the teller next to her and shared about a horse that they really needed to find a home for. They no longer could give the horse the care and attention he needed. And with some family issues of their own, the need to find a new home was pressing. The gears in Diana’s head, then later my own, began to turn. You see, Selah has had a passion for horses as long as she could walk. She learned to read primarily with library books about horses and equine sciences. I would scratch my head at the veterinarian books she would check out and try desperately to sound out the long words!  And at the age of 6, she knew more about horses than may employees of farm supply stores! She had long wanted a horse – though we didn’t have the property to keep one. But there was something about this case…

So, again, with more prayer and in

conjunction with an already scheduled visit from my

mother from Michigan, we made arrangements to meet him at the Grimm
home. A beautiful 19 year-old Strawberry Roan Mustang/Saddlebred cross. And while he was a bit on the thin side, his personality showed through and they bonded immediately. A friend, Eddie

Ragsdale, a fellow pastor and someone who is far more experienced with horses, met us that day to check him out for soundness and temperament. Eddie agreed that he was
sound. We heard the back-story of how the owner got him when he was still young, and she had learned horse training with him.  We also heard of her previous attempts to give him away, only to stop the loading of him when she saw signs that he was not going to a loving home – but more likely a truck to Mexico and a meat factory!

So the adventure began – and every day for a month – rain or shine, Selah made the trek to feed Mr. Buddy (she changed his name pretty much immediately) and to take care of a minor hoof issue that had to be dressed daily., and to spend time walking him and getting to know him.

Over Christmas break, we got a significant snow and cold weather – right at the only time we had to build the fence at my 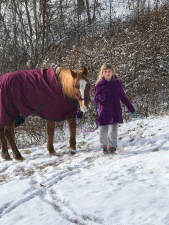 Dad’s house, along with a lean-to shelter. Selah worked harder than I have ever seen her work, even in the bitter cold – stretching barbed wire, digging post holes, and generally working herself to the bone. I was indeed proud of her – and she was determined to make a home for Mr. Buddy.

Interestingly enough, her report card that came in the winter already showed a marked improvement. And by the time Mr. Buddy was moved to his new home, Selah already was a new kid. Her attitude and behavior was much improved and her school work – she actually soon became the “most improved” in her math class!

Over the last 11 months of their relationship, Selah has grown up a whole lot, endured the transition to Northwest Arkansas with amazing grace, and actually climbed to an

“All-A’s” report card! And while she is still an active and sometimes absent-minded 12 year old (as of just two days ago), her passion for Mr. Buddy and their relationship has been a true encouragement.  Mr. Buddy became Selah’s encouragement, her drive, and her Miracle. Even more interesting, when we found a place to live here, we found a place where we had access to several acres where he could have all the room he wanted
all to

himself. He further filled out and was looking several years younger -Selah’s friend was truly blossoming. We even bought her a new saddle and tack for early Birthday/Christmas – and she had been riding him regularly.  I even finally mounted up and took a short ride on him just a few weeks ago! Indeed, it became abundantly clear that Mr.  Buddy was a gift from God- exactly what Selah needed to direct her energies, passions, and knowledge toward something bigger than herself (literally!). Our family grew to live Buddy as Selah did and it was a really joy to visit with him and scratch his chin, brush him down, or simply watch Selah work and ride him!

But then… Last Friday, the day after Thanksgiving, Selah brought Mr. Buddy and Merle Haggard (our recent donkey. acquisition… 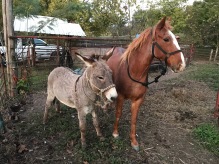 a whole other story) over to the back yard. All was well, until Saturday morning when we discovered something wasn’t right. Merle had slipped and gotten stuck in the fence – but also noticed quickly hat something wasn’t right with Mr. Buddy as well.  They both were out of water, and Buddy was obviously in some distress. He wouldn’t drink when given water, and
appear to be able to eat – a serious red flag for a horse that could eat like, well… A HORSE! He wasn’t even interested in his usual favorite treats. After all afternoon and night trying to get water into him, we called the vet. The vet said to keep an eye on hime and keep trying to get him water. He made it through the night, but Sunday he continued to get worse. We called the vet right after we got home from church and she rushed out. Quickly she determined Mr. Buddy was choked – and began irrigating his esophagus through a nose tube to try to flush out the choke. After nearly an hour and a half of irrigation, some mild sedatives, and eventually pain medication, we got the choke free. He was weak, but actually drank a little bit of water (after a gallon of electrolyte solution was pumped in to him).

Sunday night he seemed to be a bit better and he took shelter under the back deck. Each afternoon this week, Selah dutifully got home from school and gave Mr. Buddy his penicillin injection. He appeared to be feeling a bit better each day, even eating almost a gallon of soaked alfalfa over night Tuesday-Wednesday. I even got video of him “playing” with his water on Wednesday. Things really seemed to be looking up for him – and that just maybe he was out of the woods. I gave him another batch of soaked alfalfa last night before we all went to bed and he seemed glad to get it.

This morning began like so many others – the girls were up and out to school and work early.  I was taking care of some things around the house and then was heading out the door just before 9AM to head to my own office. I remembered to head out back to check the critters one more time.  I stepped out on the deck and called for Merle and Mr. Buddy.  No response.  Normally, Merle would come running pretty much any time I stepped on the back deck. I walked down the deck stairs into the back yard and saw Merle laying near the back fence.  I began walking across toward him when I saw Mr. Buddy about ten feet away laying on his side.  By the time I got to Merle, I could see that Mr. Buddy wasn’t breathing and Merle didn’t want to leave his side.  I’m glad no neighbors were home, as I am fairly confident they would have thought someone had died.

Diana came home from work, and I headed to the school to get Selah. That was the second hardest news I have ever had to break to her, but I knew that it would be about the hardest she had had to come to grips with in her young life. We both cried int he school office. We cried on the way home – and cried at home where she bailed out of the truck and ran to the back yard and to Mr. Buddy’s side where she wept uncontrollably for some time.

I am still in shock – and this reminds me all too much of what I have experienced both in my own family and with others in my role as a pastor – folks getting seriously ill, but then improving only to suddenly pass days later.

I do wish to thank our newest deacon at First Baptist Church, Cave Springs – Bro. Roger Meredith who called me immediately after he got word of our loss and offered his tractor for me to get the burial done.  I would also like to thank Bro. Larry Williams who offered advice and helped to finish up the burial when I got way beyond my own knowledge and ability to operate heavy machinery. And thank you to the many who have been, and continue to, pray for Selah and the rest of us.

My mom calle this evening as we finished supper – she is as emotionally torn up as any of us. But in her words, she included something that was painful yet comforting at the same time – that maybe Mr. Buddy had accomplished his purpose in Selah’s life – and his job was done, and just maybe when we all have had the time to grieve, that the opportunity may come for Selah to get another horse – maybe a younger horse that she can invest more in.

Mr. Buddy – a Miracle in our daughter’s life! We will be forever grateful for the huge part of our life you played, even for such a short time, and especially the real difference in the life of one little girl… 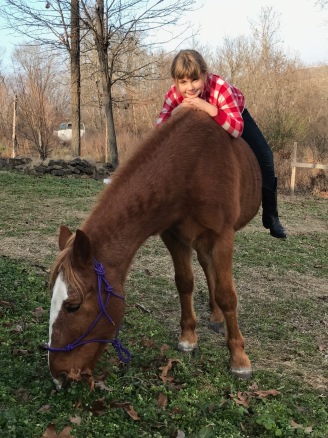 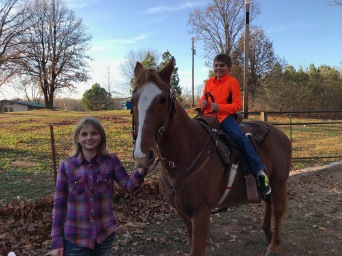