XIV. Of Baptism and the Lord’s Supper
We believe that the Christian baptism is the immersion in water of a believer, into the name of the Father, and Son, and Holy Ghost; to show forth in a solemn and beautiful emblem, our faith in the crucified, buried and risen Saviour, with its effect, in our death to sin and resurrection to a new life; that it is prerequisite to the privileges of a church relation, and to the Lord’s Supper; in which the members of the church by the sacred use of bread and wine, are to commemorate together the dying love of Christ; preceded always by solemn self-examination.

The New Hampshire Confession of Faith is a beautiful document that is the original foundational statement of faith the church association I am a part of rests. it does a beautiful job of describing baptism.  This document itself finds its origins in Scripture (of course), as well as a preceding Confession which is somewhat more detailed and the one to which I prefer to fall back on – the Baptist Confession of Faith 1689, as it holds more details. The chapter on Baptism is as follows:

1 Baptism is an ordinance of the New Testament, ordained by Jesus Christ, to be unto the party baptized, a sign of his fellowship with him, in his death and resurrection; of his being engrafted into him; of remission of sins; and of giving up into God, through Jesus Christ, to live and walk in newness of life.(Romans 6:3-5; Colossians 2:12; Galatians 3:27; Mark 1:4; Acts 22:16; Romans 6:4)

4 Immersion, or dipping of the person fin water, is necessary to the due administration of this ordinance. (Mat 3:16; John 3:23)

I bring this up because of an all too common issue that comes up from time to time in ministry:  Those who make professions of faith, especially at a very young age, that

might not have been genuine professions at the time. But because of “our” relatively modern methodology of “get them to say a prayer and dunk ’em” has led to many false assurances of salvation, and ultimately spiritually dead church members. In his book Death To Life, Allen Nelson IV refers to these folks as the walking dead. The startlingly sad reality is that there are (and have long been) those who – as he put it:

We would be stunned at how many people have a date written down in their bible but not their name in the Lamb’s Book of Life. Even more alarming is how many of these people might be pastors, deacons, Sunday school teachers, or other prominent leaders within the church. Just because people feel saved, doesn’t mean they are saved. (From Death To Life: How Salvation Works, Chapter 2, p. 19)

This is a reminder of why I am so thankful for several brethren the LORD placed in my path as I began ministry. One that really sticks out in my heart on the issue of salvation and baptism is Bro. Harrel Herring. Bro. Harrel’s real burden and passion was for not just professions of faith – but for genuine conversion.  His own testimony was one oft-heard – having “walked the aisle” when his brother did, and an evangelist who asked all the wrong questions and offered raving, yet false, assurance of salvation.  Bro. Harrel knew at the time he wasn’t genuinely saved – but who was he to question or argue the 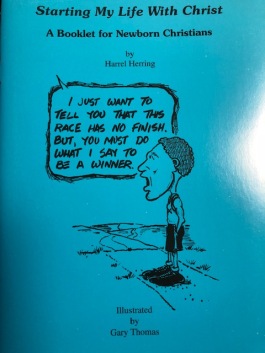 point as a youngster?  But Harrel knew what the problem was and did indeed come to
genuine repentance and saving faith.  But this experience planted in him the passion he spent much of the rest of his life trying to help other to avoid false professions and to find real, saving faith. Indeed, I first met Bro. Harrel at Budd Creek Baptist Camp during the BMA of Arkansas week back in 2006. At camp, Bro. Harrel had the privilege of meeting with each young person who made a profession, to ask the right questions to at least have some basis for recording decisions.  He also gave out copies of a booklet he had put together specifically for new believers titled Starting My Life With Christ. I still have a handful of copies and find it quite useful!

The problem Brother Herring was trying to address is a real one. Every church I have been a part of in my walk since conversion has had more than one similar illustration – someone who made a profession, but then at some point later determined that it was not a genuine conversion and came to Christ afterward.  Unfortunately, there are those in churches who never do realize their repeating of a “sinners prayer” was nothing more than the “vain repitition” Jesus spoke of in Matthew 6:7! They are, as Allen Nelson labeled them – The Walking Dead.

But God is indeed full of Amazing Grace! And He does still call many from that spiritually dead state to new life! He is indeed faithful to call ALL who are His to repentance. And the responsibility of those He does call out of that dead state is to, as those lowly fishermen Jesus called in Galilee did – drop your nets and follow Him!

And one of the first steps one called to new life to take is baptism. Even if you were dunked in a pond, creek, pool, or “official” church baptistry – if it was on a false profession – it was nothing more than getting wet.  It was not a genuine act of obedience in faith. Therein lies the rub for many – whether it is pride or shame, some who realize their old profession was without merit find it difficult to publicly proclaim their newfound salvation for fear of shame or for their position. And many shudder at the thought of submitting themselves for “re-baptism” (a misnomer if the first was not scriptural). Sadly, some never make known their latter genuine conversion for fear of what others will think. And this is what brings me to the impetus for today’s entry:

As both a father and a pastor, I am always extremely concerned about the possibility of pressuring a young person, particularly my own daughters, into a “decision” that is not God-initiated, and preceded and empowered by the Holy Spirit and HIS complete work in salvation. In this case, my youngest daughter, Selah, made a profession several years ago while I was still in my first pastorate (Park View Baptist Church, North Little Rock). She followed on the heels of her older sister. Both had been immersed in the gospel from birth (or before if you consider in-vitro time in church!). Both had received the benefit of not only their mom and me trying our best to speak and demonstrate the gospel, but a church with many caring souls who also poured into them the words of Life. So when Selah came to me and said she had asked Jesus into her heart, she had all the right answers, to the right questions (as Bro. Harrel would put it). Selah is sharp and while casual observation might lead you to believe she is paying zero attention – she soaks in what is going on around her in an amazing way. So – after several of us visited with her, she submitted herself to be baptized.

Yet far too often, we saw signs that gave her mom and I serious pause regarding her actually having seen genuine regeneration. Some of her actions going way beyond “childhood indiscretions” or “immaturity”.  Six months ago, Diana and I both voiced concern about Selah’s spiritual condition and began praying in earnest for answers, guidance, and for God to truly work in her.

On Wednesday evening, July 18, those of us at Ozark Baptist Encampment, Week 1, those of us at camp knew something was up.  But when I got the message that I was needed at our girl’s cabin at nearly 10:30PM, I knew something was serious.  Selah was afraid that I would be mad if she told me – but she knew without a doubt that when she made her “profession of faith” several years ago – it wasn’t real – she just did what she knew the rest of us wanted – and what got her positive attention. There were signs this time of genuine contrite heart and very heavy conviction.

And the Sunday after camp, Selah came before First Baptist Church and confessed before the entire assembly of what had happened, including her false profession years ago, and submitting herself humbly for baptism! I am pleased to announce that on Sunday, August  19, I get to genuinely baptize my precious daughter! And don’t ever doubt my joy and thanksgiving that God didn’t just leave her to her own case of The Walking Dead! And don’t ever doubt the power of God to call His own unto repentance and genuine salvation!