Everyone has a point of view – Fact.

And everyone filters their life experiences and observations through their point of view or perspective – and this is where the term “presupposition” comes in. A presupposition is one’s beginning point – it is an assumption or set of assumptions that may or may not be backed with evidence.  Presuppositions can be helpful, or in the case of many in our nation today – can be a major component of growing divisions, hate, and even violence.

In the world of theology, we often defend our viewpoint or even our entire faith system with what is called presuppositional apologetics, that is – defending our faith based on a pre-established and “assumed” foundation. Unfortunately, using presuppositional techniques to defend the Christian faith tends to fall a bit flat in the face of those most often being answered, as they do not hold the same presuppositions.  For example, I build my typical defense on my own absolute assurance that the Bible is the Word of God, inerrant and unchanging. For those who absolutely deny this about the Bible – it makes a very poor and unconvincing starting point indeed!

My theology is centered on the John 1:1 statement that The Word (aka – Jesus) IS God. Indeed, it is very difficult to make an argument for the efficacy of Jesus’ atoning work on the cross if He wasn’t really God in the flesh.

In the secular world (and in some churches… but this is a whole other discussion and can of worms), many people view their neighbor through a set of presuppositions (assumptions). For some, they have a racially intolerant set of presuppositions. In the history of our nation, we see entire sets of laws, regulations, and general treatment of people groups based on a flawed and unjust set of presuppositions.  Why is it that young black men were sometimes beaten or even lynched by hateful mobs based solely on a single, unverified accusation? 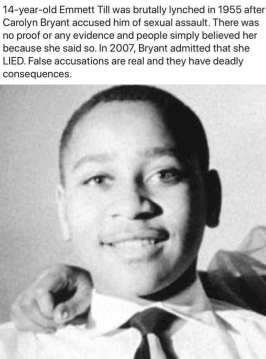 Stories like that of Emmett Till, the 14-year-old who was lynched in 1955 after a woman accused him of sexually assaulting her. No proof, no evidence. But the mob who brutally sought “justice” accepted the accusation as the truth specifically because of their erroneous presupposition that black males are criminals.

Our presuppositions are sometimes developed by our own study, growth, and experiences, while others develop from their environment – in the case of racial presuppositions – they are often the product of parents and those they choose to be around.  When you add in what has been experienced – we become pragmatic – our own experience just MUST be a universal experience – and therefore taints everything we see. I remember vividly to this day my mom being mugged by an African-American man when I was still an elementary student. And I confess, that jaded my view of black men for a time. Thankfully, my mom had a far different view – and made it clear that I could not and must not judge all black men by the actions of this one brutal criminal.

Presuppositions, fueled by those filled with hate, politics, and the media are dividing our nation along with many different lines. Those who have been brought up and/or immersed in bias and hate tend to accept as fact the narrative being pushed from every corner.  We see some who insist that White Men are the “devil” and are responsible for the world’s problems.

Therefore, those who buy this presupposition then view all news with an expectation that White Males (aka – the “privileged” class)  are always to be blamed. This carries over to the accusations of racism. When your presupposition is that racism can only be perpetrated by whites and that the victims of racism can only be Black (or more broadly, non-whites) – then you turn a blind eye to a major portion of the actual racist behaviors and troubles happening in our nation. Add to this the widespread propaganda of the #BlackLivesMatter movement – that (whether intentionally or not) promote a presupposition of a single racial group to have more value than others, and we further bend the public presuppositions and actually FEED hate and divisions.

The answer is startlingly simple: View all people with this Presupposition:

You see, Scripture clearly says that mankind was made in the Image of God. That is all of mankind – all nations, tribes, tongues. We all are image-bearers of the Creator. And while individuals do act contrary to their Creator and His character, we all are touched by sin, we still have value as image bearers. Judge each individual by the content of their character, not the color of their skin (Dr. Martin Luther King Jr.).

More recently, we have seen a literal disgusting circus fed by other twisted presuppositions. Judge Brett Kavanaugh stands as the latest nominee for a vacant seat on the United States Supreme Court. By all measures and his record, he is imminently qualified, has lived a life and served a career with integrity. He has been honest in admitting his alcohol consumption in high school. Yet this man stands accused of ugly violent behavior against a woman when he was 17 years old.  Accusations made some 36 years after the alleged crime. And many in the public sphere have been more than willing to accept the accusations, despite vast holes and inconsistencies. Why? Because of faulty presuppositions: That a privileged white boy from a well-off family, who was a student (and apparently an outstanding student and athlete) at a prestigious private school, who liked to drink absolutely MUST have committed the alleged crime. That is just what rich, white boys do – and “always” get away with it.  We have a collision of class warfare, class jealousy, and a massive #metoo movement that presumes women are always the victim and that any doubts about the validity of a woman’s accusations against a man are nothing but #misogynistic #womanhating efforts to shame the #victim.

There is a similar issue that happened just a few years ago when the #Ferguson Missouri riots were going on as a (purported) response to the death of Michael Brown at the hands of a Ferguson Police officer. The narrative followed the presupposition that police nationwide were engaged in an “open season on black men”, as originally proclaimed by US Representative Hank Johnson (D- Georgia). When you believe in such a presupposition, you will be a willing participant in the supposed response.  Closer to home here in Arkansas,  Judge Wendell Griffen of the Sixth Judicial Circuit (and infamous anti-death penalty protestor while having an active death penalty case before his bench) began issuing very aggressive support for the rioters – actually justifying their actions because of Hank Johnson’s proclamation! One would think a judge would be willing to actually see what the evidence would say as opposed to jumping on the racial and anti-police bandwagon absent any meaningful evidence. But for Judge Griffen, his racial presuppositions trump truth and evidence. And he willingly became another part of the division in this nation.

So what is the answer? I’ve already given it to you – viewing our neighbors as being image bearers of God. Quit basing our judgment on skin color, economic background, or whether one is male/female. Begin with the evidence. Be willing to withhold judgment until the fog of the event or circumstances can settle a bit.

Filter what you hear, even if it comes through your favorite media outlet or your best friend, through a presupposition of that Image-bearer lense and seek the truth, not assumed guilt simply because of race (or more recently – because of gender). Quit swallowing the vitriol being spewed from every angle.

And let us look at what the Bible says about our differences – and the “great equalizer”:

Only in Jesus do we really begin to see each other as God sees us. Further, when we are In Christ, as new creations – we can set aside our former selves, our previous flawed and sinful presuppositions, and begin to see our neighbor through a new lens – as a person and soul – that has value and who is, at the core, in need of the same salvation we need.

And after all – who is the author of confusion and hate? Satan.

One thought on “Presuppositions and Division”